I’ve never understood guest books at weddings.  I have nowhere to store the thing nor will I ever flip through it to look at the names.  They’re just weird to me.  My husband’s opinion was “We need a guest book?  What for?”  Exactly.

I still liked the idea of something for people to sign with well wishes.  I’ve seen the plates, but I don’t want to serve food on a plate of signatures.  I also don’t want to display the plate – why have a plate that is just a dust collector?  A frame mat is also an idea that is being heavily marketed, but I feel like the picture would have to be a wedding picture.  I realize this is going to sound odd, but I think displaying lots of wedding stuff in your home has a shelf life of either two years or one child.  I didn’t want something so obviously screaming wedding on my wall in ten years.

I decided to take into account where my husband and I were each from: Buffalo, NY and Philadelphia, PA.  Both cities are on the water (Lake Erie and the Delaware River, respectively) so I decided to make a picture where one city was reflected in the water of the other.

Since the picture was going to have to be large enough to fit all the signatures, I needed high resolution photographs of each city’s skyline.  I turned to this website: www.dreamstime.com.  I was able to choose one photograph from several that were 300 dpi – excellent! 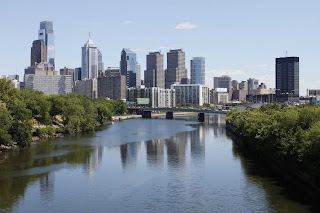 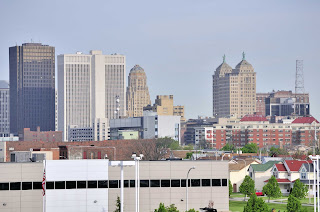 I put each picture into Adobe Photoshop because the program would retain the high resolution of the images.  I first gray-scaled both images because I didn't want to worry about matching all the colors.  I rotated the Buffalo photograph 90° and then copied it below the Philadelphia photograph. 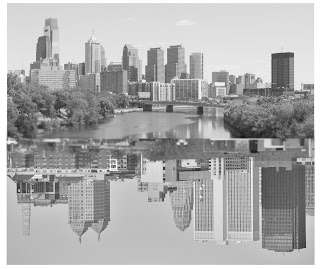 From here, I had to find a way to blend the photographs together.  This was by far the most complicated part because I wanted to blend them well.  I’m not exactly stellar with Photoshop since I’m not a graphic designer, but I ended up using the stamp tool at the intersection of the photographs.  I think it turned out pretty well. 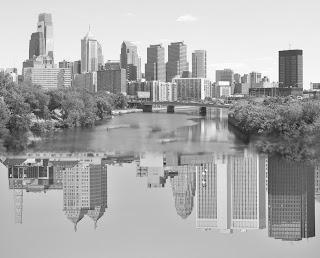 After that, I sized the finished image to 18” x 12” and had it printed at Kinkos!  We put a small sign at our reception explaining that the image was a fusion of our two cities and we’d be happy for everyone to sign it!  It turned out great. 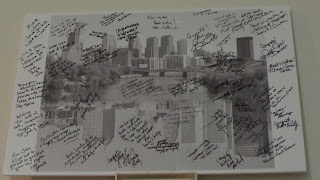 Now, if I would just buy a frame for it.